Sprouts And Microgreens: What Are The Health Benefits And The Difference Between The Two 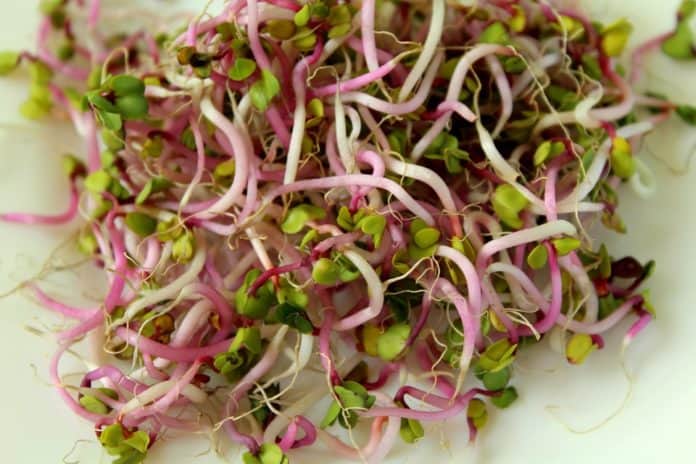 Sprouts are seeds that have germinated and become very young plants. Sprouts are generally consumed raw, but may also be lightly cooked before you eat them. Sprouts are often added to salads, stir-frys, and other dishes.

Many different types of seeds can be sprouted at home with minimal equipment. Here is a list of the most common types of sprouts available on the market:

Spouts are very nutritious. Despite being low in calories, sprouts are a rich source of nutrients and beneficial plant compounds. When a person consumes a sprout, he or she is essentially consuming the entire plant and getting all the benefits of that plant. Sprouting increases the vitamin and mineral content of nuts and seeds and increases the nutrient absorption of these foods. Sprouting foods for a limited period “causes increased activities of hydrolytic enzymes, improvement in the contents of certain essential amino acids, total sugars, and B-group vitamins, and a decrease in dry matter, starch, and antinutrients.”

The major benefit of sprouting is that it unlocks the beneficial enzymes. These enzymes make all types of grains, seeds, beans, and nuts easier on the digestive system. Studies show that when seeds are sprouted, the amount of fiber they contain increases and becomes more available. Sprouting appears to specifically increase the amount of insoluble fiber, a type of fiber that helps form stool and move it through the gut, reducing the likelihood of constipation. Sprouting also decreases gluten proteins substantially. Plus, it ables to increase in folate and dietary fiber.

Aside from decreasing gluten protein concentrations, sprouting has been shown to help reduce other food allergens (especially one called 26-kDa allergen) that are found in grains like rice.

Sprouts are also great sources of antioxidants and other beneficial plant compounds that support healthy cell regeneration and protect against free radical damage. One study found that after sprouting buckwheat for 48 hours, the concentration of beneficial antioxidant compounds called rutin was increased more than 10-fold. Researchers also found another antioxidant flavonoid, quercitrin, that became newly formed.

Sprouting can increase its nutritive value by raising phenolic and flavonoid antioxidant levels. Antioxidant levels significantly increased and improved free radical scavenging and anticancer activities when compared to the seeds that had not been sprouted.

There are also different types of sprouts that support the body in various ways:

Microgreens are made from greens that have been harvested before maturation. They are young vegetable greens that are approximately 1–3 inches (2.5–7.5 cm) tall, with a more intense flavor and highly concentrated nutrient profile.

Microgreens are considered baby plants, falling somewhere between a sprout and baby green. Similar to baby greens in that only their stems and leaves are considered edible. However, unlike baby greens, they are much smaller in size, have an aromatic flavor, and concentrated nutrient content, and come in a variety of colors and textures. It can also be sold before being harvested.

Cereals such as rice, oats, wheat, corn, and barley, as well as legumes like chickpeas, beans, and lentils, are also sometimes grown into microgreens.

Why you should start growing microgreens now?

Microgreens are the second-fastest thing you can grow and eat – only sprouts are faster. Since microgreens can be grown from virtually any vegetable or herb, it’s a great way to get more variety in your diet.

Microgreens are packed with nutrients and be many times more nutritious than mature plants, containing vitamins, minerals, antioxidants, and polyphenols. Research comparing microgreens to more mature greens reports that nutrient levels in microgreens can be up to nine times higher than those found in mature greens.

As such, they may similarly reduce the risk of the following diseases:

Sprouting can be a fun, interesting way to grow food indoors regardless of the weather. By sprouting beans and grains, you are boosting the nutrition of your food at no extra cost. They may also offer a variety of health benefits, including easier digestion, improved blood sugar levels, and a lower risk of heart disease.

That said, for the majority of healthy people, the benefits of eating raw or lightly cooked sprouts likely outweigh the risks.

While microgreens, are flavorful and can easily be incorporated into your diet in a variety of ways. Given that they’re easy to grow at home, they’re an especially cost-effective way to boost nutrient intake without having to purchase large quantities of vegetables. They’re also generally very nutritious and may even reduce your risk of certain diseases.

How to Reverse Type 2 Diabetes Naturally

Lily - May 19, 2021 0
Diabetes has grown to “epidemic” proportions, and the latest statistics revealed by the U.S. Centers for Disease Control and Prevention state that 30.3 million...