What You Need To Know About Coconut oil and Alzheimer’s 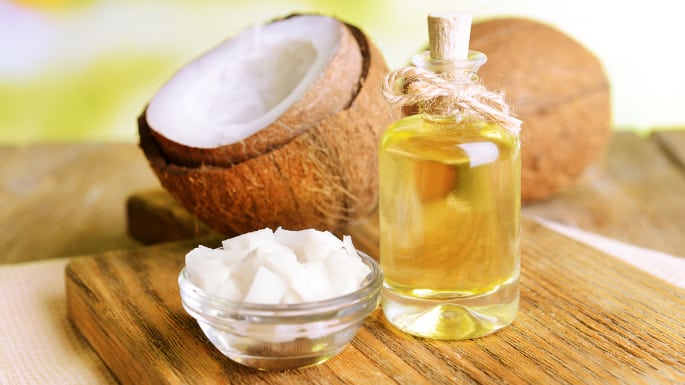 “Coconut oil as a treatment for Alzheimer’s” is one of those claims that has been around for a few years, but so far there hasn’t been enough studies, so there is little evidence that this could be helpful. This blog post explains the thought behind coconut oil as a treatment for Alzheimer’s and why we should be careful until there is enough scientific evidence to back up this claim.

Is Coconut oil an energy for the brain?

To understand the idea behind coconut oil for Alzheimer’s, we need to step back to understand some of the fats and energy.

Most of us are consuming oil in our diets, be it vegetable oil, sunflower or olive. Oils are fats, high in energy that our body usually turns into glucose to use. Different oils and fats have different compositions and structures. A component of coconut oil is caprylic acid. This is divided into “ketone bodies” that can also be used by our cells for energy. Glucose and ketone bodies are not the only sources of energy for our body, but they are the most relevant here. Our brain usually draws most of its energy from glucose, but ketone bodies can also be used by our brain cells.

During Alzheimer’s disease, we can see from brain scans that it uses less glucose in the areas affected by the disease. It is thought that this is due to a number of causes, which include, but not limited to:

So, the idea is that ketone bodies, provided by coconut oil, gives the brain the energy needed to function properly. Some neuroscience and Alzheimer’s experts do not abide by this argument: if the cells are dead or dying from Alzheimer’s disease, giving them energy will not help because it can’t protect them. Still, more testing is needed before we can come to conclusions.

We know that normally when we run out of glucose like for example because of prolonged fasting, our brain starts using ketone bodies for energy. But we do not know if this also happens in Alzheimer’s disease, let alone if consuming coconut oil, which can be converted into ketone bodies, might help.

Scientists are continuing to study ketone bodies as a possible treatment.

Some tests have been done in the United States, in a product containing caprylic acid. Its manufacturers have conducted phase II clinical trials of the product and found that people who took it improved their memory function in comparison to those who took a placebo. However, phase II trials are not sufficient to prove that something is effective, they are too little and are designed primarily to observe side effects and dosage. The company has not conducted phase III clinical trials to confirm the efficacy of its product, so it is marketed in the United States as a medical food, that doesn’t require any clinical tests.

The manufacturers of these products are the only ones who claim that they could help people with Alzheimer’s. There are no published clinical trial results on coconut oil, although a study in the United States is currently recruiting since April 2017. We must conclude that for the moment there is no scientific proof that coconut oil can help people with dementia until we have the results of a large-scale clinical trial.

Energy dysfunction in brain cells is important in Alzheimer’s and many researchers around the world are still studying how this process is involved in the disease. We must conclude that at this time there is no scientific proof that coconut oil can help people with dementia.

It is important to follow a healthy and balanced diet. This, along with regular exercise, could help reduce the risk of developing dementia. It is also paramount to remember that a healthy and balanced diet is especially significant for people with dementia, to ensure that they receive all the right nutrients. We do know that coconut oil is a very healthy oil providing many benefits to your overall health. So, adding it to your diet in moderation will probably have positive effects on your health, but as with anything please consult your physician before making any changes to your diet or physical activity.

If you happen to have any experience or knowledge about using coconut oil for Alzheimer’s, let us know!

Ramon Henderson - April 5, 2018 0
Benefits of Raw Honey What is raw honey? Raw honey is 100 % pure, unfiltered and unpasteurized sweetener created by bees from the nectar of...